TTIP and You (Part 1): What the Transatlantic Trade and Investment Partnership means for Ireland and its SMEs

It’s been called a cialis generic “great agreement’’, a “monstrosity”, a “landmark achievement”, and “the biggest threat to democracy you’ve never heard of”. Indeed, it appears to be one of the most controversial issues in contemporary politics. But what exactly is the Transatlantic Trade and Investment Partnership (TTIP), and what does it mean for small-medium sized enterprises (SMEs)? In this two-part blog, we’ll seek to answer these questions, providing a brief overview of the agreement and examining its impact on SMEs in Ireland and cialis online china the United States.

So what is TTIP? 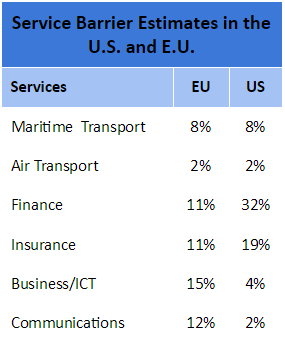 The Transatlantic Trade and Investment Partnership (TTIP) is a proposed free trade agreement intended to do away with many of the remaining trade barriers between the European Union and the United States. Creating the largest free trade scheme in history, the deal is expected to increase annual economic gains between the European Union and United States by as much as €119 billion and €95 billion respectively, raising each of their GDPs by about .5%. Begun in 2013, negotiations on the agreement have sought to address numerous questions of trade and investment that have dogged US-EU economic relations since the 1990s, and negotiators have targeted several major areas for reform, these including (among others): regulatory coherence, trade facilitation, dispute settlement, and intellectual property. Controversy has arisen in both the United States and the EU over various regulatory matters, but most fervently over the issue of food safety and the creation of an Investor-State Dispute Settlement apparatus to arbitrate cases lodged by investors against member states. The scale of said opposition has brought into question the future of the agreement, with sizable portions of the public turning sharply against it, but it remains to be seen whether the plug will be pulled on negotiations which–while planned to have ended in 2014–are expected to continue through the end of the decade.

Ireland, like the rest of the EU, stands to be significantly– 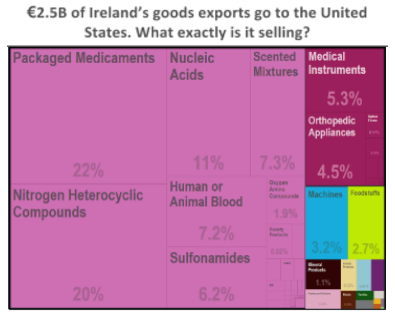 though not drastically–impacted by any finalised TTIP agreement. Given its position in the global economy, canadian online pharmacy however, Ireland stands to gain more than most. This is mainly a result of the fact that the United States plays an outsized role as an Irish trading partner as opposed to the rest of Europe. Indeed, lowest viagra prices nearly half of Ireland’s extra-EU (and 21% of total) exports are sent to buyers in the United States, as opposed to an EU total of only 16%. For this reason, it is anticipated to add a total of €2.0 billion to Ireland’s annual trade gains, increasing its GDP by ~1%, double the .5% increase expected for for the EU as a whole. This growth will not fall evenly throughout the economy, however. Rather, several less competitive areas of pharmacy compounding in canada the economy are expected to take mild losses as opposed to the expected gains in those areas where Ireland retains a comparative edge.

Among the sectors most likely to see losses, the most prominent are business and ICT (Information and Communication Technology) services. With the removal of barriers to service trade between the EU and US, Irish exporters 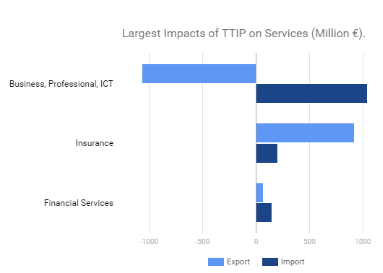 in these areas are expected to face much stiffer competition, resulting in significant economic contractions. While companies in these fields should certainly brace themselves, most of the economy should expect to see only mild changes in profits and wages, with a few industries seeing strong gains. One of the largest examples of the latter is Ireland’s chemical industry. Already taking up nearly 80% of Irish exports to the United States, the sector is expected to grow by as much as 2.7% if trade barriers are lowered as expected. Exports of electric machinery, too, will benefit significantly from TTIP’s impact, and are anticipated to increase by 2.3%.

The biggest unknown factor in all of this is the fate of Ireland’s substantial agri-food sector. U.S. agricultural regulations and food standards are somewhat less restrictive of industrial practices, resulting in its agri-food sector being significantly more productive (and, many argue, less safe) than that of Ireland and Europe at large. In particular, the United States’ attitudes towards GMOs and the treatment of livestock are seen as making its farms more competitive and potentially less safe than those of the Europe, resulting canada pharmacy program in its agri-food exports meeting stiff regulation and outright bans in the EU. These restrictions have somewhat insulated Europe’s agri-food industry from the global market. This protection, combined with scientific controversy about the need for said regulations, has led some in the U.S. to argue that they serve to guard the livelihoods of Europe’s farmers as much as its consumers’ health. As promethazine codeine canada pharmacy such, the United States has made the removal of certain phytosanitary measures one of its main trade priorities. Public sentiments on this side of the Atlantic are strongly against any changes, however, and EU policy reflects this. Since the inception of negotiations, EU officials have repeatedly defined reductions on agri-food regulations as a non-starter, and with opposition to TTIP mounting, it seems increasingly unlikely that Europe’s leaders would tempt fate in such an unpopular manner.

Among the various parts of Ireland’s economy, SMEs are expected to see some of the largest relative gains. Firstly, while current trade barriers are (outside certain service/agricultural sectors) low enough for large corporations to profitably navigate, they can entirely stop companies with smaller profit margins from exporting. Indeed, SMEs may be as much as 50 times more sensitive to non-tariff barriers than their larger competitors. Reductions in these trade barriers, then, are expected to have an outsized effect on SMEs, giving many firms access to the previously unattainable option of exporting their goods and services.

The deal is not entirely good news for SMEs, of course. A freer market means more competition, and Ireland’s business-friendly environment is projected to draw even larger flows of foreign direct investment (FDI) than are already occurring. This could mean a small drop in employment by Irish-owned SMEs in certain industries, and a rise in employment by foreign multi-nationals. This is expected to increase overall employment.

This sums up our overview of TTIP’s impact on Ireland and its SMEs. Be sure to read Part 2, covering TTIP’s impact on the United States, and keep an eye on our Twitter and Facebook pages for more insights into the world of global trade.

◇ What Does Ireland Export to the United States? – Observatory of Economic Complexity