Trade and investment with Australia: Are you being served?

An ambitious trade deal with Australia has Chinese businessmen aflutter

ZHU Xinli has gone from prey to predator. The firm he runs, China Huiyuan, is the country’s largest privately owned juice firm. In 2008 Coca Cola, the largest drinks firm in the world, tried to buy his company but was prevented from doing so by Chinese regulators. Today, Mr Zhu is on the prowl for big acquisitions of his own—down under.

China’s juice king joined nearly two dozen of China’s leading private businessmen on a recent visit to Australia. The group, which calls itself the China Entrepreneur Club, wanted to investigate new opportunities created by an ambitious free trade agreement (FTA) that was agreed in principle by President Xi Jinping of China and Australia’s prime minister, Tony Abbott, on the sidelines of a recent G20 summit in Brisbane. Such is the importance Australia attaches to this deal that on December 1st Mr Abbott himself met the visiting fat cats.

One important aspect of the FTA, which is to be formalised in a few months, is that it makes life easier for private Chinese firms. In the past state-owned firms looking for big energy or mining deals dominated southerly investment flows—and, in the process, provoked wails of a takeover by China of Australia’s crown jewels (Australia’s natural resources are in huge demand in China: see chart). 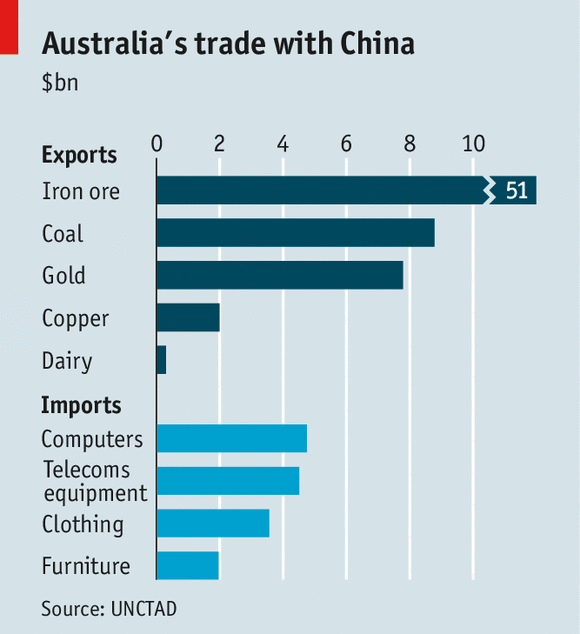 Such talk was always absurd. Chinese direct investment pales in comparison to flows from America—and in any case has long been subject to prior approval by a government review board. But a recent study by KPMG, a consultancy, and the University of Sydney found that investment is shifting toward smaller deals and private investors.

Under the new trade deal, if an acquisition by such a private firm is smaller than about a billion dollars, prior approval is no longer needed. Mr Zhu has had a team of eight people scouring the country for possible targets in the agricultural sector. New Hope Group, whose boss is also a member of the business club, plans to spend some $500m on deals in the farming, animal husbandry and food sectors.

Another important aspect of this FTA is that it represents the biggest opening of China’s services sector to foreigners. Chinese leaders are keen to transform the economy, from the world’s sweatshop to one that is focused on domestic consumption and services. These range from nursing homes and express delivery companies to firms providing financial advice or legal services.

What explains this apparent zeal for opening? Some in China see Australia as a good place to experiment. The country is the most urbanised of the advanced economies, and as such has a highly sophisticated consumer base and innovative service-companies. By giving such businesses greater access to China’s market, Chinese officials are hoping to inject competition that will force lazy incumbents and oligopolists to shape up. But because Australia is much smaller than America or Europe, local firms are unlikely to be overwhelmed by such an inflow. Shock therapy is not the Chinese way.