The expat entrepreneurs who introduced craft kombucha to the Irish market

In the space of two years, Tracey and her partner Ronan have seen their craft kombucha travel from the confines of their spare-room-microbrewery in Westmeath to the shelves and menus of over 100 health food stores, cafes and restaurant across Ireland.

The pair saw a gap in the Irish market and having returned from London in 2017 after six years away, they embarked on establishing their own company – KO Kombucha.

The couple began brewing small amounts of the tea at home and selling it to friends and family, and within seven months, they had moved into a commercial unit in Co. Offaly. 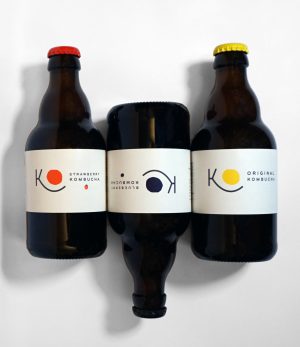 Kombucha is a mildly fizzy fermented drink made from sweetened tea and a specific culture known as the symbiotic culture of bacteria and yeasts. The fermentation process, when done right, will produce a sour, sweet distinctive flavour profile. KO’s small-batch brewing techniques guarantee this profile is attained consistently.

Like yoghurt, kombucha has active probiotics (good bacteria), thus KO Kombucha’s small batch brewing is essential in maintaining its full benefits– the more you manipulate it through processes used in mass-production, the less active it will be. This weighs not only its health perks but on its taste too.

Unlike other fizzy drinks, the tea is packed with beneficial acids, enzymes and minerals rather than sugar or artificial sweeteners, and there are potentially a whole host of other health benefits too. The company has received rave reviews from people struggling with digestive issues and other ailments.

While kombucha is rapidly growing as a business in Ireland, there are very few small-batch producers like KO, who, while importing their tea from Asia, source their other main ingredients locally and work directly with Independent Irish retailers.

Building strong relationships and buying local are values upon which KO Kombucha were founded, values which encompass healthy living, hard-work and a pinch of humour.

The company, who have maintained a strong social media presence and emphasise their ethically-minded branding were rewarded with a nomination for Health & Wellness Product of the Year at the 2019 Irish Food & Drink Business Awards.

Ronan and Tracey are looking to consolidate the market in Ireland before eventually exporting to Europe and beyond – the sky’s the limit for this innovative Irish company.