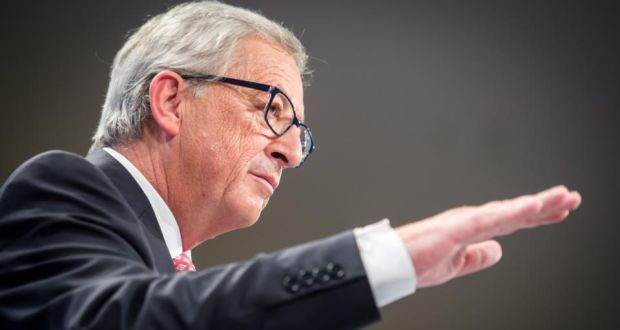 The incoming head of the European Commission, Jean-Claude Juncker, unveiled an EU executive team today that handed key economic responsibilities to French and British commissioners but overseen by others in a new-look hierarchy.

Naming Britain’s Jonathan Hill to a brief including banks and the integration of EU capital markets was widely seen as a gesture to British prime minister David Cameron, a vocal critic of Mr Juncker and his support for a powerful Brussels that Mr Cameronsays could push Britons to vote to quit the European Union.

Pierre Moscovici, the nominee of French president Francois Hollande and a proponent of government spending to boost euro zone growth, will run economic and monetary affairs. But in a mark of the balance among the competing interests of the 28 EU member states that Mr Juncker is obliged to respect, both the economy and finance portfolios will be overseen by two vice-presidents on Mr Juncker’s Commission.

Former prime ministers Jyrki Katainen of Finland and Valdis Dombrovskis of Latviawill be respective vice-presidents with oversight of “Jobs, Growth, Investment and Competitiveness” and “The Euro and Social Dialogue”. Both northern euro zone countries are allies of Germany and backers of austerity.

Germany, as economic powerhouse of the Union, is sure of a major say in its affairs. Berlin’s representative, the outgoing EU energy commissioner Guenther Oettinger, will be responsible for the “digital economy”, notably the telecoms industry. The introduction of an upper layer of seven vice-presidents without their own direct portfolios, including a powerful first vice-president in the shape of Dutch foreign minister Frans Timmermans, was explained by Mr Juncker as a way to improve the coordination of the Commission’s work.

Others have long pointed out that giving each member state a seat on the executive has made it increasingly unwieldy as the EU has expanded greatly.

However, some analysts questioned whether the overlap of responsibilities could also now create confusion and fuel rivalries among the various commissioners.

Mr Juncker, a former prime minister of Luxembourg whose appointment by EU leaders in June was fiercely opposed by Mr Cameron, said his goal was to provide the European Union’s half a billion people with better prospects after tough years of unemployment and stagnation that fuelled a surge in support for anti-EU parties in May’s election to the European Parliament. “In these unprecedented times, Europe’s citizens expect us to deliver,” Mr Juncker told a news conference.

“Today I am presenting the team that will put Europe back on the path to jobs and growth.”

In a surprise move, Mr Cameron’s Conservative ally Hill, a former public relations consultant and leader of the upper house of parliament who is little known even in London, was given a revamped portfolio entitled Financial Stability, Financial Services and Capital Markets Union.

He will be in charge of relations with the European Banking Authority. One analyst described Hill’s job as “a major peace offering” by Juncker to Cameron, who welcomed the appointment as showing that efforts to create a banking union was not the sole preserve of countries using the euro currency.

Britain has feared that euro zone efforts to regulate financial markets to guard against new crises could hurt London’s dominance as a banking centre. Keeping Britain in the bloc is a major goal for EU leaders in the face of Cameron’s demands for Brussels to devolve powers and plan for a 2017 referendum on continued British membership.

The nomination of Nordic allies of free-trading Britain to key roles in global trade negotiations and anti-trust policy may also offer London comfort. Danish liberal Margrethe Vestager will be in charge of the powerful competition portfolio that gives the EU a big say in the expansion or merger plans of the world’s biggest companies.

Sweden’s Cecilia Malmstrom will have the task of negotiating the world’s biggest trade agreement between the United States and Europe. Miguel Arias Caneta of Spain will be energy and climate change commissioner, though former Slovenian former premierAlenka Bratusek will have the more senior post of vice-president overseeing the development of an energy union.

Elzbieta Bienkowska of Poland is commissioner for the internal market, industry, entrepreneurship and small business.

Mr Juncker noted that he had nine women on his commission, the same number as in the outgoing team led by Jose Manuel Barroso – something that members of the European Parliament had said would be important to their confirmation of the Commission in office. Of the seven vice-presidents, three are women, including 41-year-old Federica Mogherini of Italy, who was chosen directly by EU leaders as the Union’s foreign affairs chief.