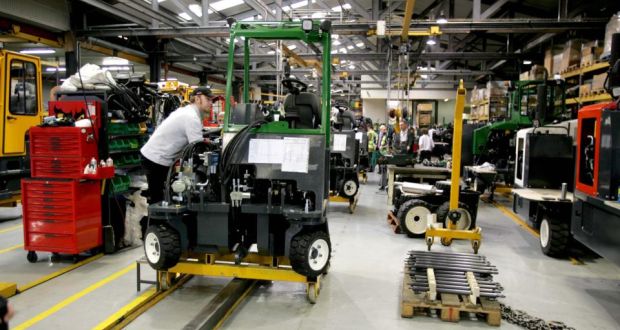 Irish manufacturing expanded at the fastest rate since 1999 in August, a survey showed on Monday, as a surge in new orders offered further evidence that the economy is recovering steadily.

The country has seen a string of positive data in recent months and analysts forecast that the economy will grow 3 per cent this year after two years of near stagnation.

The Investec Manufacturing Purchasing Managers’ Index (PMI) rose to a 15-year high of 57.3 in August from 55.4 in July, well above the 50 line dividing expansion from contraction and representing the 15th straight month of growth.

“This is a strong outcome, particularly when framed against the backdrop of weakening signs from some Eurozone trading partners of late,” said Investec Ireland chief economist Philip O’Sullivan.

“With manufacturing firms in Ireland stepping up their purchasing and hiring activity, it is clear that they are optimistic of a strong finish to the year.”

Manufacturing accounts for about a quarter of Irish gross domestic product, according to World Bank figures.

In contrast to one of its smallest members, manufacturing activity for the euro zone as a whole fell to a 13-month low in August, according to flash data out recently.