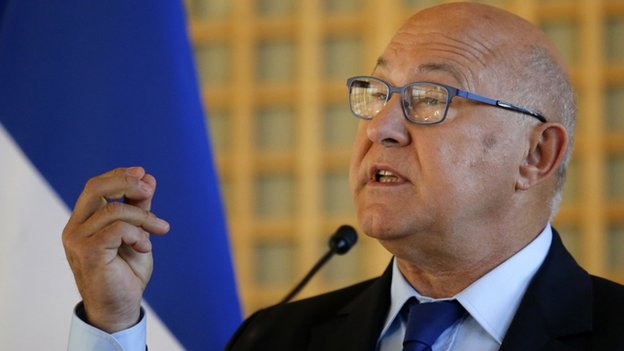 France’s budget deficit will be around 4.3% of GDP in 2015, missing an earlier target, Mr Sapin said

Mr Sapin also lowered the country’s growth projections for this year and next.

However, France was not requesting a change in European Union rules, he said at a press conference.

The government will maintain its current plan for 21bn euros (£17bn) of public spending savings in 2015 while not raising taxes during that year, he added.

France plans to cut public spending by 50bn euros by 2017.

The country has missed a number of budget deficit targets, and has struggled with high unemployment and low growth.

In August three French ministers resigned amid a bitter row over economic policy.

More on This Stor

If it’s got marshmallows, it’s in this box! Our Marshmallow Mood bundle comes packed with a variety of handcrafted mallow bites.
Buíoch Irish Chocolates

Treat yourself to these delicious award-winning chocolates, each handmade with love and care in the west of Ireland.
Noo chocolates

Polly and Andy’s family box of bamboo socks is the perfect soft and cosy present for you and your loved ones.
Polly and Andy

Are you stuck thinking of gift inspiration for a food-loving friend or perhaps want to explore for yourself? Look no further than the Asian Food Starter Kit.
Fused by Fiona Uyema

The perfect selection of Mic's Chilli sauces to explore the range, with beautiful natural flavours and heat levels from mild to wild, this is the box for all hot sauce lovers out there!
Mic’s Chilli

Do you need a kickstart in the morning? Something to invigorate the senses, the body, and the skin? Holos Skincare provides this vegan, cruelty-free PETA approved, and, more than anything, uncomplicated Good Morning wash and be gone routine.
Holos

Enjoy guilt-free snacking with these unique-tasting chickpea snack bars. Based on a traditional Indian/Punjabi recipe, they are packed with goodness and will keep you going with a smile.
HIYA Snack Bar

Turn your bathroom into a "spathroom" and indulge yourself or a loved one with these natural, vegan body care products.
Dublin Herbalists

Create an aromatic relaxing moment with this self-care gift box. Indulge your senses with these handmade products using the finest natural ingredients and pure essential oils to create a luxurious ambiance at home, in the office, or in your comfort zone.
Berry be Beauty

Discover the beauty in every cup of coffee with this box of freshly roasted coffee beans.
ARTESSA

Featuring the Candied Jalapeno BBQ Sauce, once you try this, there is no going back. Liven up your BBQ skills with our Candied Jalapeno products, perfect for topping burgers and hot dogs and adding that sweet and spicy flavour.
Haynes Gourmet

Look! A trio of our dark chocolate barks bundled up only for you. Satisfy yourself with these three savory flavours: peppermint chia crunch, orange & activated walnut, and salted nibs & activated hazelnut.
Nibbed Cacao

This box is filled with the most popular flavour of this all-in-one indulgent, refreshing Mariko drink. Sparkling Berry is brewed green tea infused with whole raspberries, elderberries, and hibiscus.
Mariko

Get Up & Glow Beauty Box

Get your glow on and go with this fantastic box from Nima Brush, an Irish multi-award-winning cosmetic brush and accessories brand.
Nima Brush

Get your hands on the most amazing-tasting superfood blend you have ever tasted!
Juspy

Match your lifestyle & wellness goals with a selection of unique Solaris chakra tea! It is uniquely blended by a master tea blender & medical herbalists (BscHons) to balance your life chakra.
Solaris Tea

SELECT
We use cookies on our website to give you the most relevant experience by remembering your preferences and repeat visits. By clicking “Accept All”, you consent to the use of ALL the cookies. However, you may visit "Cookie Settings" to provide a controlled consent.
Cookie SettingsAccept All
Manage consent

This website uses cookies to improve your experience while you navigate through the website. Out of these, the cookies that are categorized as necessary are stored on your browser as they are essential for the working of basic functionalities of the website. We also use third-party cookies that help us analyze and understand how you use this website. These cookies will be stored in your browser only with your consent. You also have the option to opt-out of these cookies. But opting out of some of these cookies may affect your browsing experience.
Necessary Always Enabled
Necessary cookies are absolutely essential for the website to function properly. These cookies ensure basic functionalities and security features of the website, anonymously.
Functional
Functional cookies help to perform certain functionalities like sharing the content of the website on social media platforms, collect feedbacks, and other third-party features.
Performance
Performance cookies are used to understand and analyze the key performance indexes of the website which helps in delivering a better user experience for the visitors.
Analytics
Analytical cookies are used to understand how visitors interact with the website. These cookies help provide information on metrics the number of visitors, bounce rate, traffic source, etc.
Advertisement
Advertisement cookies are used to provide visitors with relevant ads and marketing campaigns. These cookies track visitors across websites and collect information to provide customized ads.
Others
Other uncategorized cookies are those that are being analyzed and have not been classified into a category as yet.
SAVE & ACCEPT