There are rising concerns in Europe over negotiations to liberalise trade with the United States.

The project, the Trans-Atlantic Trade and Investment Partnership, or TTIP, aims to remove a wide range of barriers to bilateral commerce.

Demonstrations were taking place across Europe on Saturday, with large numbers of events in Germany, France, Spain and Italy,

In Britain, events were planned in at least 15 cities and towns.

One campaigner involved in planning the day of action said she expected at least 400 local actions in about 24 European countries.

The EU and the US launched the negotiations last year and the aim is to stimulate more trade and investment, and, in the process, to produce more economic growth and employment.

It has proved to be extremely controversial.

One aim of the negotiations is to reduce the costs to business of complying with regulations. A firm in, say Europe, that wants to export to the US often has to comply with two sets of rules.

Critics say the result of this would be lower standards of protection for workers, consumers and the environment. Food safety is a particular concern among European opponents of the negotiations. 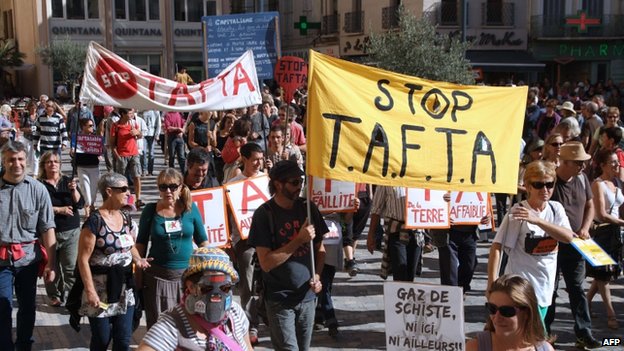 People in the French city of Narbonne joined the protests 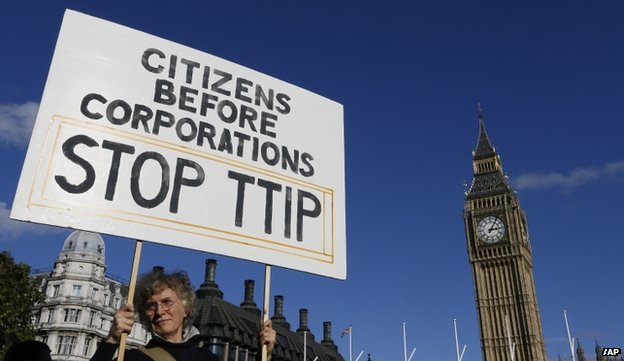 In the EU, campaigners say that consumers could be faced with more genetically modified food, hormone treated beef and chicken meat that has been rinsed with chlorine.

Another major concern is the provisions under discussion to enable foreign investors – for example American firms investing in the EU – to sue a host government in some circumstances if they are hit by a change in policy.

That turned out to be so controversial that the European Commission decided to hold a public consultation. There were 150,000 responses which the Commission is still analysing.

The conduct of the negotiations is also contentious. Campaigners say they are secretive and undemocratic. They also dispute TTIP advocates’ claims about the economic benefits.

The European Commission rejects these criticisms. It insists that standards will be maintained and that the negotiations are accountable and transparent. 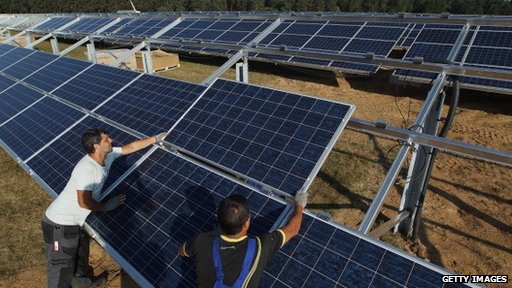 The UK government has called a meeting with environmental groups on Monday to quell their opposition to TTIP.

The groups are worried that the plan would allow American industry too much influence over the setting of standards for improved efficiency of goods.

The environmentalists are also disturbed by plans for a dispute settlement procedure. They say it could be used by multi-national corporations to block moves to protect the environment.

The government meeting – at the Foreign Office – has been called by the climate change minister Amber Rudd.

She will say that removing trade barriers to green goods and services, like solar panels, will benefit the environment by helping reduce costs and encouraging innovation. She says she looks forward to hearing the groups’ views.

Tom Burke from the environmental organisation body e3g will tell her that the deal will be unacceptable unless it guarantees that the highest possible standards will always apply.

In Britain, there is a specific concern among campaigners about the possible impact on the National Health Service (NHS). They fear that if a government ever wants to reverse any contracting of health services done by a previous administration, it could be expensive – because, they say, any American companies that lose business as a result could sue, using those controversial provisions for foreign investors.

Some campaigners even believe that TTIP might force governments to privatise some health services.

The trade union Unite wants health explicitly excluded from any TTIP deal. The union’s Assistant General Secretary Gail Cartmail said recently: “It is clear this government thought they could do this deal in secret, a deal that would mean the irreversible sell-off of our NHS to America.”

But the Health Minister Earl Howe says it would not be in the interest of British pharmaceutical firms to exclude health from the negotiations as they currently face trade barriers in the US.

Again, the European Commission says the concerns are misplaced, stating that TTIP “could have no impact on the UK’s sovereign right to make changes to the NHS.”